Naga Sadhus who are very famous for being a very prominent part of Kumbh Mela in India. People say it is very difficult to find them apart from Kumbh Mela in regular life, but our team got a chance to interact with one Naga Sadhu who was driving Tata Magic (yes, he knew driving), he was driving to meet his friend. Tata Magic was borrowed by him from one of his friends. He seems to be a very cool person. They don't own any material like a phone, vehicle or even a single penny with them. 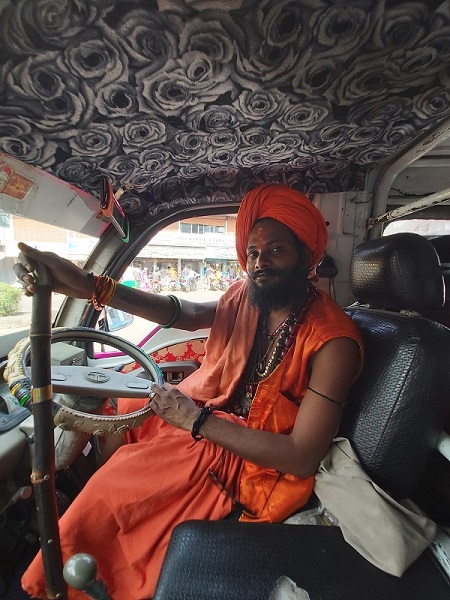 Naga Sadhus are one of the communities which don't have recognition under our constitution, they have no national ID card like Aadhar card or driving license etc. Naga Sadhus usually lives in akharas or do austerity in the Himalayas. But we found one in the city region and asked him some question.

Who is a Naga Sadhu?

Naga Sadhus are very different from any other kind of monks, they believe that they are the true worshipers of Lord Shiva. Every Naga Sadhu belongs to a particular group called Akharas. There are 13 identified akharas. Naga Sadhus reside in caves of the Himalayas in the worst cold temperature naked and self-controlled, they are believed to live a lifelike Shambhu but only one uncommon thing they have with their God, Shiva is a destroyer and they are the reason of Foundation of Hindus. One should not make them angry, as they are very short-tempered. One should not make fun of them in front of themselves, as anytime they can lose their temper and can curse you. Preference is always given to them have the first bath in Kumbh fest. They never afraid of death, they wish to die worshipping lord Shiva to achieve freedom.

Their appearance is also like their lord, they believe to have ashes as their clothes and never prefer to cut hair, hence most of them are bald or having very long hair. Their long hair is usually knotted. They also do makeup with ash as it is part of their daily routine. They also wear Rudraksha mala or skull on their neck. You will find them always chanting Alakh Niranjan or Bum Bum Bhole. They also carry Trishul, sward, chillum and two-headed drum with them.

Nagas had fought many small wars for the protection of society or religion, one the famous war was against Ahmed Shah Abdali, they defeated the force of Ahmed Shah when he came to conquer Gokul after Mathura and Vrindavan.

There are many female nagas in some akharas, they wore single cloth on their body and bath along with that coth. They are not allowed to bath with bare body. Rest of the rules are the same for females.

There are still many young people who wish to join these akharas. The lifestyle of these monks are very difficult, they eat only once in a day and took the vow of celibacy. They have Kotwals who inform them about current affairs in the country and inform them about Kumbh. These Kotwals travels on a general basis to gather knowledge. They are allowed to beg food from only 7 houses if they couldn't get any from them, they remain hungry for the next 24 hours. They live their life beyond materialism.