What is OK Boomer?

'OK, Boomer' is a phrase that went viral and been used by youth to show their address against old stereotypes made by the older generation. This phrase is mainly used by millennials. Here Boomer represents the generation born between 1946 and 1965. 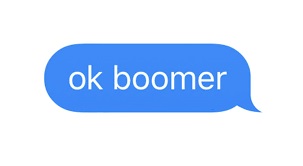 When it went viral?

It went viral around October - November 2019. It appears when a TikTok video went viral in which an old gentleman going on about how generation z has Peter Pan syndrome and needs to grow up. Here, millennials started replying him by saying 'OK, Boomer'.

*Peter Pan Syndrome - This syndrome shows one's inability to believe that they are of old age and should behave like adulthood. Refer to millennials who prefer to still want to keep the child alive inside despite being aged.

Just use this phrase in reply to old adults who try to force old stereotypes on you. As you can't make them agree over young views, hence you just ignore them by showing agreement as 'OK, Boomer'.